Places to Visit in Jodhpur

Jodhpur is one famous city in Rajasthan which is popular for its sightseeing and history where you can explore most beautiful places to visit in Jodhpur. This city is also known as the Blue City as many houses are painted blue. Jodhpur was the capital of the Marwar region of Rajasthan in the olden days. Jodhpur is also one of the finest tourist destinations in Rajasthan and India.

Mehrangarh Fort and Umaid Bhawan Palace are two of the most famous tourist sightseeing places in Jodhpur. Jodhpur has a royal history of Rajput rulers. The kings of Jodhpur built lavish palaces, temples, forts, and memorials that even today are known for their architecture and grandeur. But equally rich is the folk culture in Jodhpur. The folk tribals who live in Jodhpur are known for their love of animals and birds. You can certainly visit Jodhpur to see its beautiful monuments. Jodhpur Tour Packages is designed just for you who want to see the many places to visit in Jodhpur. A trip to Jodhpur is one of the most memorable experiences to have in Rajasthan.

To see one of the finest forts in Rajasthan, you will have to visit Jodhpur. Mehrangarh Fort is a massive fortress in Jodhpur. The fort is built on a hill and because of its elevation, it can be seen from anywhere in Jodhpur. Rao Jodha, the founder of Jodhpur, built Mehrangarh Fort in 1459. The fort is famous for its lattice windows, intricate carvings, lavish palaces, huge gates, and temples. Mehrangarh Fort was attacked several times by the enemy, and you can still see cannonball marks on its gates. The museum inside has many galleries where arms and ammunition, royal costumes, paintings, palanquins, turbans, and elephant howdahs are displayed. The palaces inside are decorated with luxurious Mughal designs.

Some of the palaces that you can visit inside Mehrangarh Fort are Phool Mahal, Moti Mahal, and Sheesh Mahal. The fort is incredible for its powerful construction. Some of the scenes from famous movies like Thugs of Hindostan, The Lion King, and The Dark Knight Rises were shot here. You can see almost the entire city of Jodhpur from atop the fort.

Jodhpur has one of the best luxury hotels in the world, and it is none other than Umaid Bhawan Palace. The palace still is the royal residence of the Maharaja of Jodhpur Umaid Singh. One part of Umaid Bhawan Palace is a museum where priceless and rare objects are displayed. There is a big collection of vintage clocks, flags, cars, paintings, and photographs. Umaid Bhawan Palace was built during times of famine, so that poor villagers could get employment in those difficult times.

The palace has the most incredible European architecture and also contains elements of Indian architecture. The art deco style of architecture lends artistic appeal to the palace interiors. The construction of this palace started in 1929 and was completed in 1943. Inside the palace are public halls, long corridors, spacious rooms, big courtyards, a banquet hall, a dining hall, and several royal chambers. Umaid Bhawan Palace is famous all over the world as one of the biggest private residences.

There are carvings and sculptures of elephants, deities, and other medieval icons on the walls of the stepwell. Jharokhas or lattice windows also have intricate carvings. During medieval times, this stepwell served as a meeting place for common people. Even royal queens came here and mingled with the common folk. Today, Toorji ka Jhalra is a popular tourist spot in Jodhpur and though it is not in use, is famous for its heritage beauty.

One of the famous sightseeing places in Jodhpur is Mandore Gardens. The cenotaphs or memorials in Mandore Gardens are famous for their architecture. These memorials were built in memory of the former maharajas of Jodhpur and Marwar. These memorials have chhatri on top and are fabulous for their sculptures and architectural beauty. These cenotaphs resemble a Hindu temple of their tall spires, pillars, and marvelous sculptures on ceilings, walls, pillars, and outer structures.

The marble cenotaph of Jaswant Thada is a monument that is famous in Jodhpur. Maharaja Sardar Singh II built this memorial for his father Maharaja Jaswant Singh II in 1899. Jaswant Thada is still used as a cremation ground for a member of the royal family. This monument has wonderful architecture and the entire structure is like a big temple. There is a garden in front of the structure and is well maintained after all these years. The carvings on marble stone, the marvelous domes, the steps leading to the cenotaph, the pillars, ceilings, all have the most magnificent carvings and sculptures.

The area near Mehrangarh Fort was a barren wasteland a few years back. It was developed to include desert vegetation, cactus plants, and many other plant species that grow in the desert. Rao Jodha Desert Rock Park came up in 2016 and is a scenic wonder near Mehrangarh Fort. There are rocky ravines, canals, rock formations, crystal formations, and plant and animal species in this park. There are nature trails that go deep into the various corners of the park and tourists can use them to explore the park. Nature lovers can spot various birds, animals, unique rocks, and fossils here.

One of the best places to visit in Jodhpur is Machia Biological Park. The park has various animals and birds such as desert foxes, monitor lizards, gazelles, mongooses, tortoises, deer, etc. You can go on an elephant safari to explore the park. There is a bird-watching point from where you can spot birds. Machia Biological Park is close to Kailana Lake. Sunsets from the park are very scenic and beautiful to look at.

Ghanta Ghar is a clock tower in Jodhpur which was built 200 years ago by Maharaja Sardar Singh. The clock is still in use, and the tower offers a magnificent view of the surrounding area. There is an old market near the clock tower which is very busy during the day and night. This market is called Sardar Market and there are various shops selling clothes, food products, kitchen utensils, kitchen items, and many others. Ghanta Ghar has an elegant European style of architecture. It was made in London by the same company that made the Clock Tower in London. In the evening, the clock tower is illuminated with colorful lights. The clock tower is 5 stories high and one can climb up the tower and go to the topmost floor.

Balsamand Lake is an artificial lake in Jodhpur that is famous for its natural beauty. Gurjara Pratihara rulers created the lake back in 1159 AD, but it was Maharaja Sur Singh who developed it in the 17th century. The lake is one of the popular sightseeing options in Jodhpur. There are lush gardens and many types of trees that grow around the lake. Balsamand Lake Palace is a famous heritage palace near the lake. This is now a heritage luxury hotel. The palace was the summer residence of the maharajas of Jodhpur. Tourists can take a relaxing walk near the lake and dine in restaurants that line the banks of the lake. The lake is one of the relaxing places in Jodhpur.

Kailana Lake of Kaylana Lake is one of the beautiful lakes in Jodhpur. This is an artificial lake that was made by Pratap Singh in 1872. It still provides drinking water to Jodhpur and its nearby areas. This picturesque lake is surrounded by lush greenery. Various migratory birds can be seen in the lake during the winter season and some famous ones are Demoiselle Cranes, Siberian Cranes, and others. There are magnificent rock formations near the lake. A temple called Shiv Mandir is located near the lake. You can do a boat ride on the lake and see magnificent sunset views. You can come here with your binoculars and do a little bit of bird watching.

Bishnois are a tribe that is known to be fierce animal lovers. They are settled in a village near Jodhpur which is called Guda Bishnoi Village. Bishnoi Village is a rural village where you can see people of the Bishnoi tribe and their lifestyle. The Bishnoi tribe is very caring and protects animals, birds, reptiles, and other creatures with utmost care. You will see birds and animals here such as blackbuck deer, sarus cranes, peacocks, and cattle being fed and protected by the tribal villagers. You can stay in the traditional houses of these villagers and see the beautiful pottery artists making utensils out of clay. Also You can go for a camel safari here or a jeep safari and see the wildlife from close range.

One of the famous monuments in Jodhpur is Khejarla Fort. Maharaja of Jodhpur built the fort in the 17th century. Today, this fort is converted into a luxury hotel. The name of the fort comes from a tree called Khejdi. The Mughal army attacked the fort many times. The royal family of Jaisalmer still resides in a section of this fort. The massive fort has various royal chambers called Mardana Mahal, Zenana Mahal, and others. The fort hosts various folk dances for its guests. The guests are treated to several luxury facilities and amenities such as a luxury restaurant, bar, library, camel rides, henna art, bullock cart rides, etc.

Mahamandir Temple is a big temple near Jodhpur. The temple architecture is beautiful with beautiful carvings on its pillars, walls, and ceilings. The temple is dedicated to Lord Shiva. There are various sculptures of deities and mythological characters. There are 84 finely sculptured pillars in this temple. With such a majestic temple, this temple is a must-visit on your trip to Jodhpur.

Chamunda Mata Temple is a historic temple in Jodhpur and is also a popular sightseeing spot. The temple is one of the oldest temples in Jodhpur. Locals believe that the deity of this temple is the deity of Jodhpur and worship her with utmost devotion. The deity of this temple is Chamunda Mata, one of the divine incarnations of Parvati. Rao Jodha brought the idol of Chaumda Mata from Mandore in 1460, which was the former capital of Marwar kings before Jodhpur.

The Jodhpur Government Museum is also called Sardar Government Museum. This museum has a rich collection of weapons, miniature paintings, textiles and costumes, sculptures, arts and crafts, inscriptions, and other interesting objects. The objects that were used by the royal family members are very carefully preserved here in this museum. The things that are on display here are as old as the 6th century. Stuffed animals are kept in this museum, which shows the wildlife that existed in Jodhpur in the olden days.

Masuria Hills Garden is on Masuria Hills in Jodhpur. The garden offers one of the most beautiful views of Jodhpur as it is built on a hill. There is a statue of Veer Durgadas Rathore, who was a Marwari freedom fighter. Inside the garden is a small temple which is dedicated to Baba Ramdev. There is a playground for children and a restaurant where locals can have delicious food. The peaceful environment of the garden and the lush greenery attracts tourists also to visit this garden.

Ranisar and Padamsar are two lakes near Mehrangarh Fort. Two queens developed these lakes in the 15th century. While Ranisar lake was developed by Queen Jasmade Hadi, who was the wife of Rao Jodha, Padamsar Lake was developed by Queen Padmini, who was the daughter of the Mewar ruler Rana Sanga. The lakes conserve water and provide water in this dry region of Jodhpur in difficult times. The lakes are situated adjacent to each other and that is why they are called Ranisar Padamsar.

Places to Visit in Jaipur 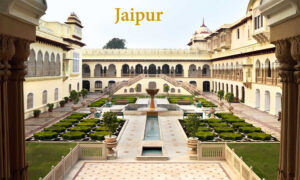 Jaipur is one of the finest heritage cities in India. Maharaja Jai Singh II founded the city in 1727. Jaipur i... read more 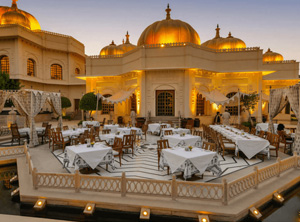 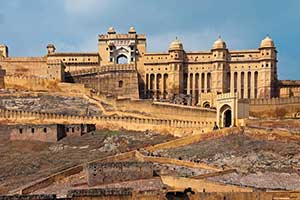 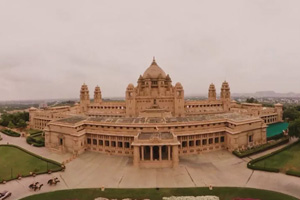 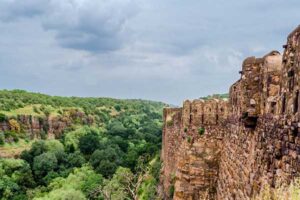 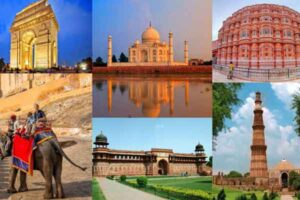