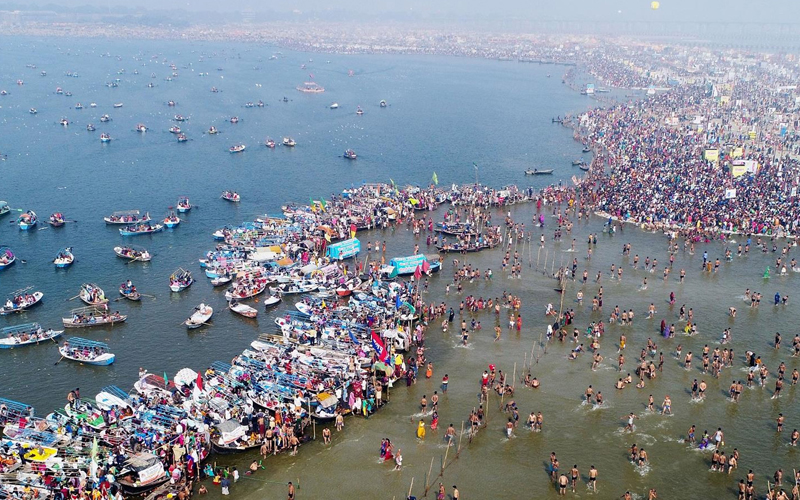 Allahabad is the present past now, but even then it was Prayagraj”. So let’s go to 10 such places of Prayagraj, which have kept the memories of the past from the ancient past to the present past fresh even today.

Here the Ganges, Yamuna rivers which are visible and invisible or extinct Saraswati river confluence. From here onwards the Yamuna also becomes the Ganges. Here, when Brahma ji performed the first yajna after the completion of the creation of the universe, since then the name of this place was named Prayag after meeting the ‘pra’ and ‘yag’ (yagya) of the first yagya. It is here that the Maha Kumbh Mela is held every twelfth year and then this confluence place is transformed into the largest floating city in Asia. Seeing the migratory birds from Russia in winter while boating at the Sangam place, apart from religious activities, is an absolutely calming and unique experience.

In 1575, Akbar established a royal city of Allahabad at Prayag and in 1583 a fort was built here at the Ganges-Yamuna confluence. Built in four parts, the first part of this fort had 12 buildings and some gardens. In the second part were the palaces of the royal ladies and in the third part there were arrangements for distant relatives and servants of the royal family. The fourth part was for the soldiers. At present it is used by the Indian Army and only a limited part is open to tourists. Tourists are only allowed to see the 10.6 meter high Ashoka Pillar (2250 years old from today) and Saraswati Koop. The Saraswati well is a well located inside the fort which is believed to be the source of the invisible Saraswati river. Watching the sunset and sunrise of Sangam from the ramparts here really makes you lose yourself in the past. The fort is built in a perfect location from the point of view of security.

This reverse fort is situated at a distance of 14 km across the Ganges, in Jhunsi. It is believed that it is situated here since the time of Satyuga. After climbing about 120 steps, you reach the fort. The view of Mahakumbh from here is very captivating or perhaps the best view. Although its construction is also straightforward, but some remains and studies give evidence of it being inverted at some point of time. It used to be the capital of Chandravanshi kings.

This is a well which is situated on a very high hill inside the fort in Jhunsi across the Ganges. Its source is believed to be in the sea because its water level is surprisingly equal to sea level and saline. It was built by Samudragupta.

In the Mahabharata, Duryodhana had built the Lakshagriha to destroy the Pandavas by burning them by burning them with fire, this is the same building. It is situated on the bank of river Ganges, 6 km from Handia.

Akshayvat is located in this mythical underground temple built inside the Allahabad Fort. It is believed that Lord Shri Ram had also come. The Chinese traveler Hyun Tsang has also written about it in his memoirs during his travels here.

Khusro Bagh is a Mughal period building located near Allahabad Junction (Prayagraj) railway station. It is spread over a vast area of 17 yards. It was built by Akbar’s son Jahangir as his resting place. There are three tombs in this garden. The first tomb belongs to Prince Khusro, named after Jahangir’s son Khusro, Khusro Bagh. The main gate to enter Khusro Bagh is very big and there are countless horseshoes attached to it. There are many guava orchards in the garden and these guavas are exported abroad. There is also a nursery here at present.

Akshayvat is a very ancient banyan tree which is believed to be of mythological period and is alive even today. This tree is the center of attraction for everyone.

Swaraj Bhawan is a historical building and museum located in Prayagraj. Its original name was ‘Anand Bhavan’. It was built by Motilal Nehru in 1899. In 1930, he dedicated it to the nation. After this, the headquarters of the Congress Committee was made here. Today it has been converted into a museum. When the Nehru family came to live in this bungalow, it was named Anand Bhawan. The old building was handed over to the Indian National Congress. A part of this building now houses a hospital known as Kamalaneharu. And the rest was kept for the use of the All India Congress Committee. From 1948 to 1974, this building was being used for the development of children’s educational activities and a Bal Bhavan was established in it.

This park (Alfred Park) was built on 133 acres of land in 1870 as a commemoration of the visit of the British princes. It is located in Civil Lines. On February 27, 1931, in this park, the great revolutionary freedom fighter Chandrashekhar Azad was surrounded by the British due to the deception given by a friend. Azad stood firm even in the midst of fierce firing under the cover of a tree and the last bullet was received by Veergati by killing himself. You must see that place. Then Chandrashekhar Azad was just 24 years old. It is said that there was so much fear of Azad in the British army that even after his death, the soldiers were afraid to go near Azad’s dead body for a long time, because they did not believe in Azad’s death.