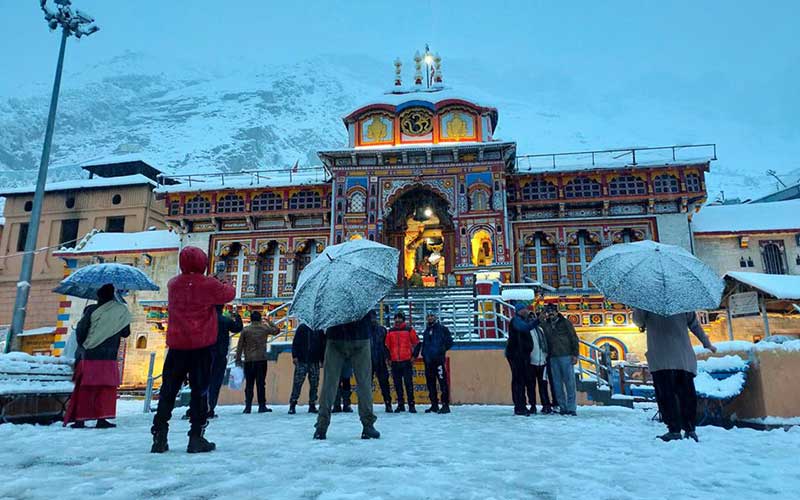 Famous as one of the most important parts of Char Dham Yatra, Badrinath Temple is dedicated to Lord Vishnu. It is said that, in Hinduism, every Hindu is required to pay visit to the Char Dham including Badrinath, once in their lifetime. The temple is surrounded with beautiful landscapes of Garhwal region of Chamoli district in Uttrakhand. Certainly, the beautiful temple of Badrinath is located at a height of 10,279 feet above the sea level. This makes the trip to be more exciting. Positioned around the banks of Alakananda River, the Badrinath temple has a statue of the presiding deity with a height of 3.3 feet. In fact, the statue is epitomized as one of the eight Swayam Vyakta Kshetras of Lord Vishnu.

The temple opens every year for six months only as other six months have bad weather conditions to make it accessible. This year in 2019, the temple will open on May 10th and would close on the day of Bhaiya Dooj.

Historical Magnificence of the Temple

Looking at the historical brilliance of Badrinath Temple, one can find its mention in the Vedic scriptures without doubt. It is believed that the temple of Badrinath was a Buddhist shrine till 8th century. In 9th century, Adi Shankara converted the place into a Hindu shrine of utmost importance. Legends say it that the idol of Lord Vishnu or Badrinath was found by Adi Shankara in the River Alakananda, which was preserved by him in a cave. Indeed, Adi Shankara expelled Buddhists from there with the help of Parmar King named Kanak Pal and established the Badrinath Temple at Chamoli. Later on, the successors of the king managed and expanded temple premises as needed.

It was in 16th century that the king of Garhwal shifted the idol of Lord Vishnu in Padmasana Mudra to existing temple premises. From there on, the idol was worshipped here. When the Garhwal district got divided, the area of Badrinath Temple came under British Rule. But, the King of Garhwal continued to handle the management process of the temple. Even, the appointment of the priest or Badrinath Rawal was done with the consultation of Garhwal and Travancore families for sure. In fact, in 17th century, the temple area was expanded by the Kings of Garhwal district. After a major earthquake in 1803, the temple was rebuilt by the King of Jaipur. From that time till First World War, the renovation task got completed.

As per the legends associated with Badrinath, Lord Vishnu meditated here, irrespective of the extreme weather conditions. In order to protect him from the cold weather, Goddess Lakshmi took a form of Jujube Tree or Badri Tree. Seeing the devotion of Goddess Lakshmi, Lord Vishnu felt impressed and named the place as Badri Ashram. At this place, Lord Vishnu practiced penance for the sake of humanity. Badrinath is the same place, from where Pandavas ascended to heaven through Mana village. It is said to be the last village of India and has a cave where Rishi Vyasa wrote the epic story of Mahabharata.

Another legend in Vishnu Purana talks about a fact that there were two sons of Dharam named Nar and Narayan. They selected the place of Badrinath to spread the goodness of Hindu religion amongst the Himalayan region and used to do Dhyana here. In the wake of looking for a perfect place to establish hermitage, they discovered other four Badris from the section of Pancha Badri named Yog Bhadri, Bridha Badri, Dhyan Badri, and Bhavish Badri. Finally, it was the hot and cold spring at Alakananda River that they decided to settle. They named the place to be Badri Vishal. Later on, Nar and Narayan transformed into mountains that stand presently behind the temple of Badrinath.

The Rawal of Badrinath Temple 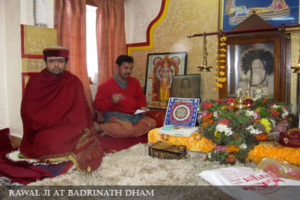 The Rawal or priests of Badrinath temple belong to Namboodhari Brahmin Clan because the associates of Adi Shankara were Namboodhari Brahmins. These priests are from the South Indian region of Kerala. Basically speaking, it is believed that such a clan of hails from Gokarnam. When it comes to the matter of selecting priests for Badrinath Temple, it has to be from the Namboodhari clan because of the tradition followed from the time of Adi Shankara. He was a theologian and a philosopher from the 8th century, who consolidated the doctrine of Advaita Vedanta. It was him, who exercised the allotment of priests in India Char Dham including Badrinath. The Pujari at Rameshwaram will be from Kashi, Nepal, Kashmir or Maharashtra, Pujari at Dwarka would be Chowbey Brahmins from Orissa, Pujari at Jagannath Puri should be Pandas from Gujarat and Namboodhari Brahmins from Kerala to work as Rawal at Badrinath.

When it comes to the matter of selecting Rawal for Badrinath Temple, there is one main Rawal assisted by Deputy Rawal or Nayab Rawal. Previously, Keshav Namboodhari was the Chief Priest of Badrinath Temple. But, after his resignation from the post, the management has been transferred to a 22-year old Namboodhari Brahmin and Nayab Rawal named B Shankaran Namboodhari. The Tilpatra ceremony of new Nayab Rawal will be held at Joshimath with Bhuvan Chandra Uniyal, Vedapathis named Radha Krishna Thapliyal and Kushal Chandra Bahuguna will be performing the ceremonial practices for new Rawal.

The schedule of the main priests at Badrinath temple starts early in the morning at 4.30 am with Pujas called Maha Abhishek and Abhishek of the presiding deities. Indeed, the schedule ends at 9 pm with Shayan Aarti. In the entire day, there are various forms of special pujas taken place like Ved Path and Geeta Path takes place between 6.30 am to 12 pm and 3 pm. Later in the day, one can opt for Badrinath Special Poojas such as Srimad Bhagwat Saptah Path, Evening Aarti, Swarna Aarti, Vishnusahasranam, Kapoor Aarti and Shayan Aarti.

In order to get the Puja done, it is important for the devotees to have a dip in Tapt Kund and headed by a priest from the special Rawal group. After the Maha Abhishek and Abhishek Puja at Badrinath temple, it opens for the general public at around 8 am and closes at 1 pm. This is followed by a small break from 1 pm to 4 pm and the temple opens again for the public till 9 pm. The temple doors are shut after reciting a divine song called Geet Govind.

Different Poojas and Its Rates at Badrinath Temple: (Rates for a Single Devotee)

Indicating the arrival of river Ganga on Earth, the most important festival at Badrinath Temple is Mata Murti ka Mela held in September month. Indeed, mother of Badrinath divided River Ganga into 12 sections for the welfare of earthly beings. And it is her, who has been worshipped as Mata Murti.

Apart from this, Badri-Kedar festival is celebrated in the month of June and lasts for 8 days with artists from all over India performing in the function. When the temple closes in winter, it is the auspicious day of Bhatridwitya in October-November. Then, an Akhand Jyoti is lit with ghee in it to last for six months

Though, one can visit any time in the six months’ time for which Badrinath temple is open for public. Still, the best time to visit Badrinath temple for hassle-free journey are the months of May-June And September-October because of harsh weather conditions.

How to Reach Badrinath Temple

By Air: When it comes to the matter of visiting Badrinath Temple, the devotees can opt for flights, trains and even buses as per their budget allowance. In fact, the nearest airport to reach Badrinath is Jolly Grant Airport at Dehradun that lies at a distance of around 146kms from the shrine. One can take private taxis from the airport to reach temple premises or to the nearby hotel.

By Train: The people willing to travel by train to Badrinath Temple can get down either at Kotdwar railway station or Ramnagar Railway station. Badrinath temple premise positioned at a distance of 146kms from Kotdwar and 154kms from Ramnagar in Uttrakhand. After getting down at the respective railway station, one can take buses or taxis to reach the temple.

By Road: Certainly, the devotees opting to travel by bus to Badrinath can take a direct bus from major cities in India to Badrinath Temple. All they have to do is make reservation beforehand to avoid inconvenience for sure.

Can you send me package for do dham yatra kedarnath and badrinath. Preferred travel date – 16 Nov to 22 Nov.
Travel days- 3 to 4 days max.
Travel for 2 people ( Couple)
Preferred budget – 30-35k