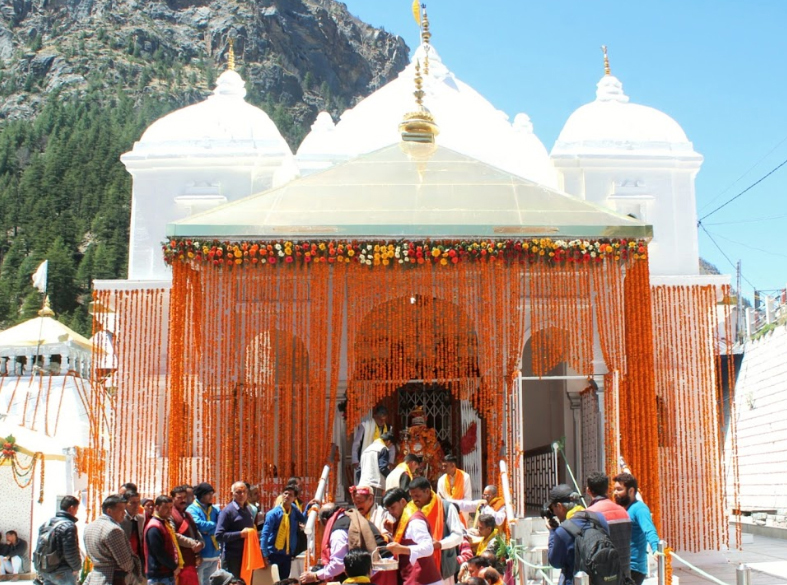 Gangotri Temple, located in the Uttarkashi district in the small town Gangotri, is known for its possession of the holy river, Ganga. The importance of gangotri temple underlines its location on the heights and its sacred nature due to the presence of several religious histories. It is thus considered to be one of the most important shrines in the chardham yatra.

History Behind the Gangotri

Built by the Gorkha General Amar Singh Thapa, the temple reflects the legendary fact of King Bhagirath’s penance. King Bhagirath undertook his grandfather Anshuman’s responsibility, and pleased Lord Shiva to descend Goddess Ganga on Earth. It holds the religious importance of Lord Shiva’s blessings by originating Goddess Ganga from the locks of his hair to absolve the human sins. Lord Shiva, to avoid any destruction, held Ganga in his locks and divided it into several streams. It is believed that the holy source of Ganga came down to the Earth only after Goddess Parvati took bath in it everyday. Thus, the water of Ganga is considered to be very pure.

The summer season is very welcoming for the gangotri yatra, that is, the time from April to June is considered as the best time to visit Gangotri Dham. The temperature of gangotri varies from 20°C to 30°C during summers which are very pleasant for traveling and trekking.

How to Reach Gangotri

Gangotri is well-connected to the roads of the major cities and thus, can be reached via air, bus, or train routes.

By air: To reach gangotri by air, avail the nearest Jolly Grant Airport of Dehradun. Taxis and buses are easily available from the airport to reach Gangotri.

By train: The gangotri train routes to Rishikesh and Kotdwar are available but the arrivals are not frequent. So, availing trains either from Haridwar Railway Station or Dehradun Railway Station is ideal.

The Architecture and Infrastructure of the Gangotri Temple

There are several festivals celebrated in the Gangotri Dham. The renowned gangotri festivals are Ganga Dussehra, Diwali, and, Akshaya Tritiya.

The gangotri temple ganga dussehra is celebrated on the tenth day, or on the Dashami tithi according to the Hindu calendar. The day is considered to be very auspicious because according to the legend, the Ganga descended on Earth on this very day. So, this festival is also known as Gangavataran. There is also a belief among the pilgrims that if they pray to Goddess Ganga with whole heart, they will be released from their ten sins. The festival continues for ten days, beginning from the Amavasya and ending on the Shukla Dashami, that is, during the month of May or June.

The gangotri temple Diwali festival holds great importance as the Gangotri Temple is closed on this day till the next winter months. The idol of Goddess Gangotri, along with other goddess’ idols are worshipped, and then transported to the nearest village, in the Mukhyamanth temple. The whole city remains lit with diyas and lights on this day. The residents clean their houses and residential areas, wear new clothes, and exchange sweets and gifts among themselves to celebrate this auspicious day.

The gangotri temple akshaya tritiya festival is celebrated with great pomp in the Gangotri Temple. On this auspicious day of Akshaya Tritiya, the temple of gangotri reopens after remaining closed during the winter months and the idols of the Goddesses are brought back to their places in the Gangotri Temple from the village. The festival is celebrated during the month of April or May. The temple is decorated and processions of religious singing and dancing are also performed with grandeur while bringing back the idols. Special puja is also performed by the priests on this day and the whole temple remains lit with diyas.

Inside the Gangotri Temple

It consists of a Sabha Mandap which leads the pilgrims to the Garbha Griha, that is, the gangotri shrine inside the temple where the idol of Goddess Ganga is placed. The inside architecture of the Gangotri Temple follows the Katyuri style, famous in the region. The architecture type is reflected in the inner sanctum which is made into a raised platform. Idols of various Goddesses like Yamunotri, Annapurna, Saraswati along with Goddess Ganga is kept on this platform, and faced towards the east where the first rays of the sun fall on their faces.

Visit Gangotri – and Go Around

Experience a divine and comfortable journey to the Gangotri Temple by booking your Gangotri Tour Package with Shrine Yatra now!