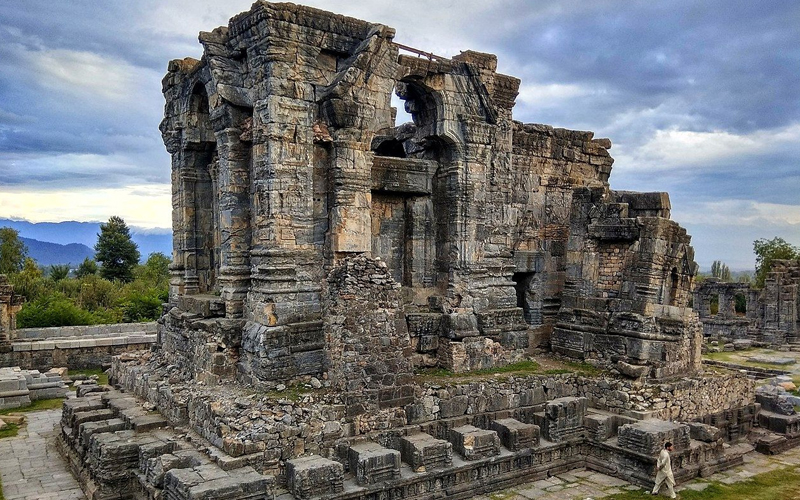 Jammu and Kashmir is such a beautiful mystery in itself, the more you try to know, the more beautiful it seems. So let’s go again towards Anantnag.

Dedicated to the Sun God, 1250 years old and one of the few selected Sun temples but ruined by foreign Islamic invaders, this Surya Mandir is located in Anantnag Kashmir. Or justly speaking, an unsurpassed piece of Hindu art is lying scattered and eating dust.

It was demolished just before the 15th century by Sikandar Butshikan while forcibly converting to Islam in Kashmir, and it has remained in the same condition since then. Sikandar Shah Miri alias Sikandar Butshikan was the sixth sultan of the Shahmiri dynasty in Kashmir. He ruled from 1389 to 1413 CE and his methods for forcefully converting Kashmiri Hindus to Islam are criticized. But it hurts when we find that even those who have this heritage have not made any concerted efforts to restore it. Although it was widely used commercially in many Bollywood songs, the temple remains as it is today. Isn’t it ironic!!

Barely 12 kms from Anantnag, the ruins of this historic Martand Sun Temple and its dilapidated condition welcome you hoping for its revival. Martand is called Mattan in the local language.

There is a reservoir here which is buzzing with colorful fish, if you go, definitely see it! When you see it for the first time, you will be blown away whether we are at such a low level of intellectual, spiritual or ability that we cannot even preserve these memories of ancestors, which are the pinnacle of art in themselves. 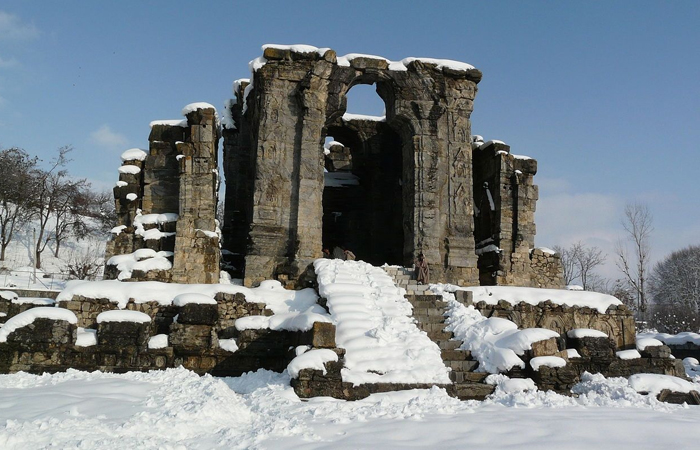 According to Rajatarangini which is the book of Kalhana (which describes the history of kings and hence the title ‘river of kings’ meaning ‘time flow of kings’) the Martand Sun Temple was built in 8th century CE by Lalitaditya Muktapeeda, the third ruler of the Karkotaka dynasty. Built during -756 CE. Keep in mind here that the time of writing this book was around 1150 CE. Today’s Kashmir is addressed as Kashyapameru in Rajatarangini. Whereas according to ‘Tarikh-e-Hasan’ (one of the oldest available histories of Kashmir) Ranaditya had established a city named Babylon in Kareva of South Kashmir and laid the foundation of a Martandeshwari temple in front of his palace between 3rd – 4th century. Was. (The word karewas is used for plateau in the local language). And it is believed that after the seventh century CE, King Lalitaditya Muktapid built the Martanda temple on the foundation of this Martandeshwari temple and dedicated it to Surya. As we discussed above, the Martand temple was built on such a high plateau part from where the entire Kashmir valley could be seen clearly, that is, from the point of view of security, it acted as a vantage point. Its ruins and associated archaeological research suggest that the Martand Sun Temple was a masterpiece of Kashmiri architecture, a blend of Gandharan, Gupta, Chinese, Roman, Syrian-Byzantine and Greek architecture. Isn’t it surprising!

Look at the level of skill of the art – in the diversity in which today the lesson of unity has almost disappeared, even at that time its creators had absorbed so many arts within it, that too without changing their basic structure.

It is not that no voice was raised for its revival, but due to the influence of politics, whatever steps were taken by the government, they have also been done half-heartedly. Except for a few basic facilities like toilets for the tourists, no impressive step has ever been taken to make this place a religious or historical pilgrimage site. The maintenance of this site is done by the Archeological Survey of India, through which information has been given by hanging a board. ASI may never get both the order and the funds to give it priority.

The main temple is located in a centralized complex, believed to have had a pyramid at its top. The pyramid at the top of the temple is a common feature seen in Kashmiri temples. The wall carvings in the hall located between the sanctum sanctorum and the auditorium of the temple depict deities other than the sun god Vishnu and the mother rivers like Ganga and Yamuna. Which awakens in your mind a wonderful feeling of the time of your ancestors.