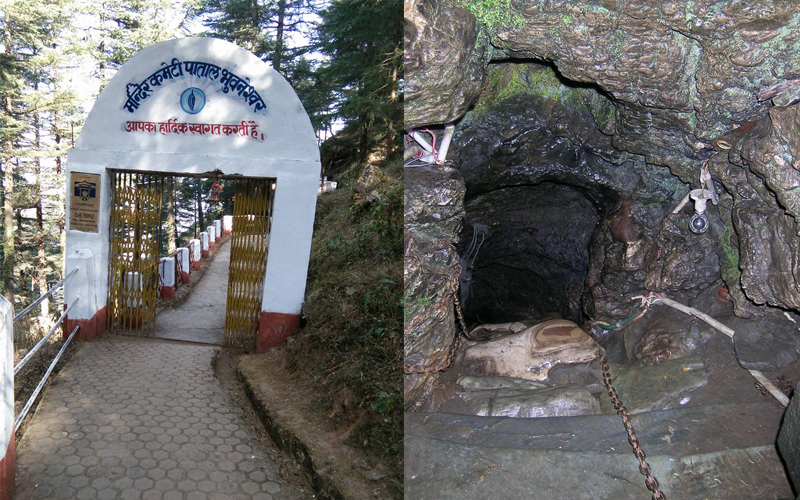 Patal Bhubaneshwar is a magical place with many hidden and unexplored aspects. Situated at an altitude of 1350 meters above sea level, this place is known as a spiritual place which is famous for the Shiva temple cave.

The name of the place itself comes from two words which mean the god of the earth and the universe. Many myths are associated with this beautiful place situated amidst a dense environment of oak and deodar. It is said that this cave is home to about 33 crore gods and goddesses. It is said that this place was discovered by King Rituparna, the ruler of Suryavansh. Must visit this place to find out the mystery associated with it.

According to the Puranas, there is no place other than Patal Bhubaneshwar, where all the four Dhams are seen together. This sacred and mysterious cave itself has centuries of history. It is believed that 33 crore deities have made their abode in this cave. It is written in the Puranas that this cave was first seen by King Ritupurna in Treta Yuga, in Dwapar Yuga, Pandavas played Chaupad with Lord Shiva here and Jagat Guru Shankaracharya was interviewed by this cave around 722 AD in Kali Yuga. A Shivalinga of copper was established here. After this, some few kings discovered this cave. In today’s time, Patal Bhubaneshwar cave is the center of attraction for the tourists. Many tourists from abroad keep coming to visit this cave.

The Head of Lord Ganesha is Inside the Patal Bhuvaneshwar Cave

In the cave of Patal Bhubaneshwar, just above the cut rock idol of Lord Ganesha, there is a rock in the form of Brahma Kamal with 108 petals. With this, a divine drop of water drips from the Brahma Kamal on the head of Lord Ganesha. The main drop is seen falling in the face of Adiganesh. It is believed that this Brahma Kamal was established by Lord Shiva here.

The Mystery of the Pillars Inside the Patal Bhubaneshwar Cave

The most interesting aspect of the cave is related to the event of catastrophe in the world. There are four pillars here. It is said that these pillars are symbols of Satyuga, Treta, Dwapara and Kaliyuga. The pillars representing the first three Yugas are of the same size but the pillar of Kali Yuga is the tallest. A body is also hanging down on top of this pillar. It is said that this body grows by an inch every 70 million years. This cycle continues continuously and the day when the pillars and bodies of Kali Yuga will meet, at that very moment there will be a holocaust in the world.

Kedarnath, Badrinath and Amarnath are also seen inside this cave. Badrinath has rock sculptures of Badri Panchayat. These include Yama-Kubera, Varuna, Lakshmi, Ganesha and Garuda. The figure of Takshak Nag is also seen in the rock made in the cave. Above this panchayat is the cave of Baba Amarnath and huge stones of stone are spread. The tongue of Kalabhairava is seen in this cave. It is believed that if a person enters the womb from the mouth of Kalabhairav and reaches the tail, then he attains salvation.

If You Go to Patal Bhubaneshwar Cave, Do Not Forget to See All This

The summers in Patal Bhubaneshwar are hot and the temperature reaches up to 47 degree Celsius. But the evenings are beautiful. Carry cotton clothes or light woolen clothes for this season. If visiting during winters, the weather is cool and pleasant with strong winds. Heavy woolen clothing is recommended for this season. However, avoid visiting the place during monsoon (July-mid-September), at which time the region is prone to heavy landslides and rain.

How to Reach Patal Bhubaneshwar Cave

By Road – Patal Bhubaneshwar Cave Temple is easily accessible by road. Buses usually ply to Pithoragarh, Lohaghat, Champawat and Tanakpur, from where one can take a taxi or take a bus ride to reach the desired destination.

By Rail – The nearest railway station is Tanakpur Railway Station, which is 154 km away from Patal Bhubaneshwar.

By Air – The nearest airport is Pantnagar Airport, which is 224 km away from Patal Bhubaneshwar.