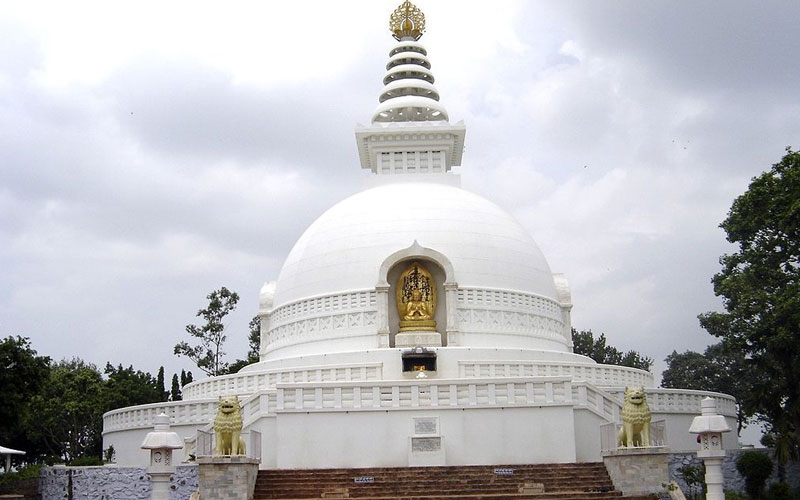 The story of Bihar is found on the golden page of history, which presents a completely opposite picture from today. Along with the main sites of knowledge and science, there has been the land of the glorious dynasties. At one time, his flag used to fly almost all over India. Even today there is so much to know and see in Bihar that you will be surprised. Generally, Bihar is not in the list of strollers, but we are going to tell you about such a place which is called ‘Kashmir of Bihar’. It is shocking that how can there be Kashmir in Bihar full of plains! For information, let me tell you that Rajgir is the only place in Bihar where hills meet.

The old name of Rajgir, once the capital of ancient Magadha, is Rajgriha, which falls in the district of Nalanda. The cool air and beautiful hills here will fascinate you. Not only this, this place is not less than a pilgrimage for those who believe in Hinduism, Buddhism and Jainism. There is more than one tourist spot for tourists, so tourists are drawn not only from the country but also from abroad.

The old name of Rajgir, once the capital of ancient Magadha, is Rajgriha, which falls in the district of Nalanda. The cool air and beautiful hills here will fascinate you. Not only this, this place is not less than a pilgrimage for those who believe in Hinduism, Buddhism and Jainism. There is more than one tourist spot for tourists, so tourists are drawn not only from the country but also from abroad.

Due to its beauty, Rajgir has developed into an international tourist destination. Surrounded by seven hills Chhathgiri, Ratnagiri, Shailgiri, Songiri, Udayagiri, Vaibhargiri and Vipulgiri, Rajgir is completely different from the rest of Bihar. Apart from the history of the dynasties, Rajgir itself holds many religious, social stories.

What to See in Rajgir?

Arriving in this beautiful city, you go on a gig, then it seems that the whole city is attractive. If you spend some time here, you can visit many places. You can collect information about them. Let me tell you about some special places here.

It is said that Magadha emperor Bimbisara has hidden his gold treasure in ‘Son Bhandar’. This is a locked cave which no one has been able to open till date. At the beginning of the cave there is a room through which one can go to the treasure but that path is closed by a rock. According to the local people, the full details of opening the treasure are written in the conch shell script on the wall of the room. But till date no one has been able to read this script. For information, let me tell you that the rulers also tried to open this treasury in the past, but due to some reason they could not succeed.

Brahma Kund and Makhdoom Kund are two such water bodies whose water is hot. This water tank is famous for its hot water where people especially come to bathe. It is said that people get relief by taking a bath in this pool. It would be surprising to know that the temperature of the water here is up to 45 degree Celsius. You will definitely find some temple around the water bodies of Rajgir.

Vishwa Shanti Stupa situated on the hill is a very holy place for those who believe in Buddhism. Golden statues of Lord Buddha are installed on this stupa of dim white color. These statues depict various postures of Lord Buddha. It is said that Lord Buddha gave the message of peace to the whole world from here. It is to be known that the stupa was built in the year 1978 on the occasion of 2600 birth anniversary of Gautam Buddha. Famous as Stupa Shanti Pagoda, the height of the dome of this stupa is 72 feet. This main center of faith adds to the beauty of the Rajgir Valley.

To dive into the history of Rajgir, about one kilometer from Son Bhandar. At a distance of Magadha Emperor Jarasandh came to see the arena. It is said that Magadha emperor Jarasandh used to practice in this arena. At present only the remains of this rare amphitheater are left. The mention of this akhara is also found in the scriptures. At the same time, definitely visit the Bimbisara jail recorded in the history books, where his son Ajatashatru had kept him captive. There is still a circle of rocks here.

This dam is in the shape of a horse, which is 6.5 km through the forest near the ropeway. Is located at. It is said that horses of military importance of Ajatashatru were kept here. Also, at the time of war, soldiers with their horses would gather here and do something from here. The natural beauty here attracts you. There is a small dam between the dense forests, hills. Don’t forget to enjoy boating in the clear waters. Be aware that permission is given to go to Ghorakatora from 8 am to 3 pm only. By 5 pm, the process of coming back from there starts. This is because there is no arrangement of accommodation there.

The new Nalanda University is operational by preparing a new campus in Rajgir, but people flock to see the ruined old university. About 13 KM from here. Far away is the ruins of the old Nalanda University. From the main road of Nalanda, you reach the ruins of the university by gig or by auto. Here you will be able to see the remaining parts of Nalanda with red bricks, which even today testify to the old tradition of India’s knowledge and science.

It is a religious belief that during the period of Malmas, all the gods and goddesses come and reside in Rajgir. At an interval of about three years, in the month of Malmas, a huge fair is held in the legendary city of Magadha, Rajgir. Apart from the holy rivers Prachi, Saraswati and Vaitarni, lakhs of devotees who come here take a bath in hot water bodies and offer prayers. People from all over the country and abroad come here to see this historical and mythological city.

When and How to Reach?

Although you can come here anytime but the months of December and January are the best time to visit Rajgir. Rajgir is well connected by rail, road and air. Patna is the nearest airport which is about 90 kms away. is far. Although the railway station is present in Rajgir, it is a better option to come to Gaya and Patna railway station for convenient travel. From there one can easily reach Rajgir by bus or taxi.