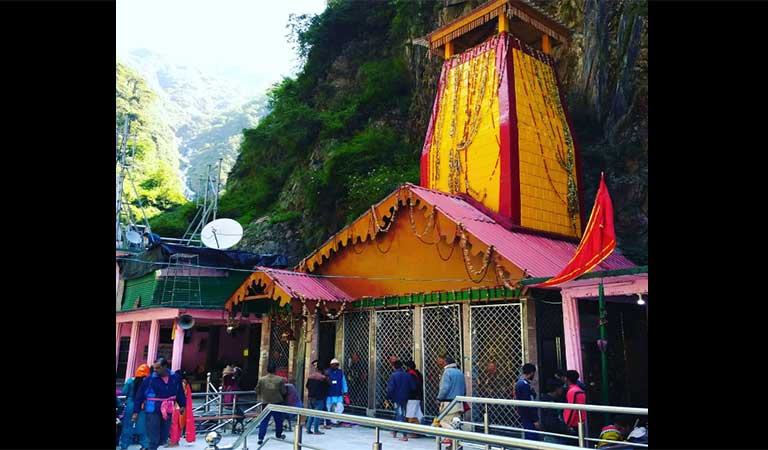 Yamunotri Temple is located at a height of 4,421 meters from sea level in the Uttarkashi district amidst the Garhwal mountains, and is known for the occurrence of the holy river Yamuna. The importance of Yamunotri temple lies in the mythological fact of Goddess Yamuna being the twin sister of Yama, the God of Death. Contrary to the twin brother, Goddess Yamuna is regard as the Lady of Life and pilgrims flock to the yamunotri dham every year to seek the blessing of long life. Thus, Yamunotri is regard as an important destination in the Chardham Yatra.

Structure and Inside of the Yamunotri Temple

The idol of Goddess Yamuna is made into polish granite in an irregular black stone and has a gleaming effect to it and place inside the Garbha Griha. An idol of Goddess Ganga, made in white stone, is kept beside Goddess Yamuna. The temple consists of a mandap where the pilgrims come together for prayer and darshan purposes. The Surya Kund or, the Divya Shila is present outside the temple and needs to be worship before the deities enter the temple premises.

The best time to visit Yamunotri is during the summer season, that is, between the months of April to June. The temperature of Yamunotri ranges from 15°C to 20°C during summers which allow you to travel and trek without any discomfort.

The Yamunotri temple opening time is at 6:00 AM daily in the morning and closes at 8:00 PM. A short recess period is maintain from 12:00 PM to 2:00 PM and after that, the darshan again resumes. There are two types of aarti or pooja ritual perform everyday in the Yamunotri Temple – Mangal Aarti and Shayan Aarti. The timing of Mangal Aarti or morning aarti is from 6:30 AM to 7:30 AM. Shayan Aarti or evening aarti is from 6:30 PM to 7:30, after which the doors of the temple is close. These pooja rituals are perform by pujaris who have great knowledge about shastras. Administors of the temple, and usually hails from the nearest Kharsali village.

Experience a divine and comfortable journey to the Yamunotri Temple by booking your Yamunotri Tour Package with Shrine Yatra!