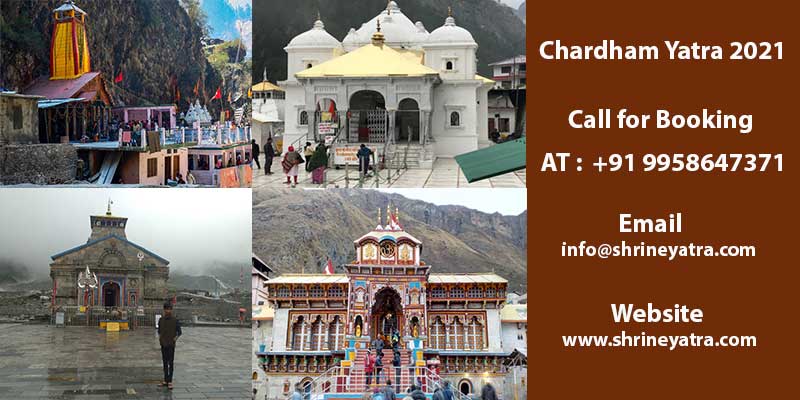 India, the land of spirituality and inviolability entices millions of devotes for cleansing their sins as faith and mystical chasers to explore the sanctity through its religious values and enigmatic temples.

Among these, the Chardham Yatra 2021 is one of the most significant divine trips of the Hindus. As per the tradition, every Hindu should turn up to Char Dham in his lifetime to get rid of the sins as well as for the enlightenment.

The main Char Dham is comprised of Badrinath, Dwarka, Jagannathan Puri, and Rameswaram established by Adi Shankaracharya. On the other hand, another small pilgrimage circuit in Uttarakhand is popular as Chota Chardham Yatra 2021. It embraces the holy places like the Yamunotri, Gangotri, Kedarnath, and Badrinath. Taking an undisputable trip to these places to help your pursuit of the ultimate goal of every Hindus, the enlightenment.

The Dev Bhoomi Uttarakhand provides boundless opportunities to the travellers. Featuring divine temples to blessed rivers, picture-perfect landscapes to mighty Himalayan it has something for everyone. You will fall in love with its surreal rivers, lofty mountains, and attention-grabbing meadows. Visiting Uttarakhand, it truly the blessing of almighty.

The Char Dham in Uttarakhand is quite popular among the devotees and attracts millions of Hindus looking for salvation. It also entails less than 10 days to enfold the sacred yatra.

The sanctified Yamunotri is situated on the western side of the Garhwal region and comes under the Uttarkashi district. The place is surrounded by glaciers and picturesque meadows and located at 3293 meters above sea level.

According to the belief the river Yamuna is the second most hallowed river in the country and Yamunotri the source of this river is the first site in the Chota Dham Yatra circuit.
Yamunotri is the adobe of river Yamuna and Yamuna Devi and snuggled in the Himalayas features a stunning setting all around. The temple features a stunning black marble idol of Goddess Yamuna and a white stone marble of Goddess Ganga.

Gangotri, the second Dham en route is the adobe of Goddess Ganga and the source of the most sacred river the Ganges. It is situated at 3100 meters above sea level in the Himalayan range. Gangotri is the most sacred pilgrimage for Hindus.

Gangotri is indisputably is situated amid all the innate exquisiteness and elegance. The river Ganges actually originated from the Gangotri glacier at the Gaumukh. The Gangotri temple is surrounded by serenity and alongside the Bhagirathi river.

Paying a visit to Gangotri is not only housed religious values but also spiritual values & peace of mind. In Gangotri, Ganga Maa is present in a humble white adobe in the form of a silver idol. Beholding the gentle yet powerful Bhagirathi river along with a sanctified temple is a treat to the human eye.

Kedarnath is devoted to Lord Shiva and features enormous religious significance and one of the twelve Jyotirlingas in India. Placed in the Garhwal Himalayan range of Rudraprayag District Uttarakhand. Adjacent to the Mandakini River Kedarnath houses awe-inspiring panoramas and enchanting mountains.

The marvelous Rudra Himalayan range, prosperous Mandakini river, serene atmosphere, and the tranquil beauty are enough to compensate for the difficult journey to the main temple. The kapat of this temple opens for its devotees in May and closes right after Diwali.

The temple is situated at a peak of 6940 meters and the holy temple features a conical-shaped. Shiva Lingam which is a unique feature among all the Shiva shrines of Panch Kedar.

The final leg in the circuit of Char Dham Tour is the Badrinath Dham. It is the adobe to the sacred meditation temple of Lord Vishnu. Amongst Narayan and Nar mountain ranges, scenic settings, and surreal environments, Badrinath temple is a paradise for all.

The Badrinarayan temple dedicated to Hindus is situated on the banks of the Alakananda river at an elevation of 3133 meters. According to a belief at the same place, Lord Vishnu meditated under a Badri tree for 1000 years for the betterment of mankind.

The Char Dham temple committee along with the Kedar-Badri Mandir Samiti fixes the Opening and Closing Dates of Chardham Yatra 2021. Mostly the temple opens on the auspicious day of Akshaya Tritiya and closes on Vijaya Dashmi, Diwali, or Bhai Dooj.

Alternatively, you can also choose Do Dham Yatra Package instead of char Dham if you have a constrained timetable or unable to extend your leave for a long period. Depending upon the available time the devotees do Ek Dham, Do Dham, or Char Dham Yatra.

Completing the Char Dham Yatra is truly a lifetime aspiration of all the Hindus. It takes you from the darkness to the radiance and from the death to enlightenment. You should explore the holy places once in your lifetime to experience the significance of Hinduism and its supremacy through a well-crafted Char Dham Yatra Package.