Panch Kailash Yatra – A Sojourn to the Sacred Abodes of Shiva

Panch Kailash Yatra – A Sojourn to the Sacred Abodes of Shiva 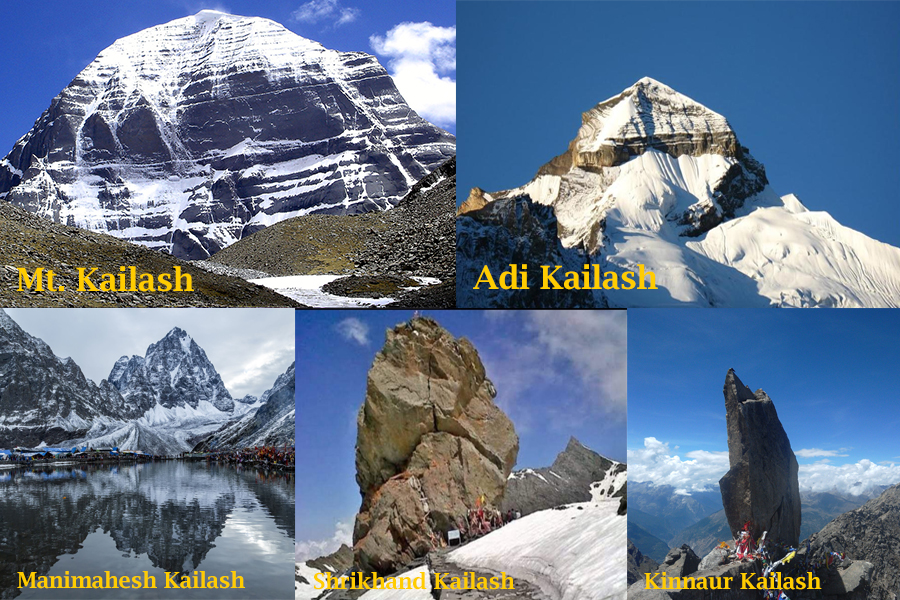 There is a total of five Kailash mountain peaks and all are in the high Himalayas. Mount Kailash in Tibet is just one of those sacred mountains. The others are in India and the states of Uttarakhand and Himachal Pradesh. All these peaks are considered to be the sacred abodes of Lord Shiva. Hindus have tremendous faith and view these mountains as the home where Lord Shiva resides with Goddess Parvati. These mountain peaks can be reached via trekking. These Kailash mountains along with Mount Kailash in Tibet form the Panch Kailash. ‘Panch’ means five in the Hindi language.

Adi Kailash is in Uttarakhand in India and is very close to the Indo-Tibetan border. It is also called Chhota Kailash. Adi Kailash Trek is one of the famous treks in Uttarakhand. The trek goes through beautiful valleys, mighty rivers like Kali, and small Kumaoni hamlets. You can see and experience the very best of Uttarakhand on this trek. Places like Narayan Ashram are on the trek route. Gauri Kund is a sacred lake at the foot of Adi Kailash. There are other ponds like Parvati Sarovar which are also very holy. But the most famous mountain peak that you can see on this route is the Annapurna peak, which is among the highest mountains in the world.

Kinnaur Kailash is in Himachal Pradesh and the word ‘Kinnar’ actually means the demigods of Hindu mythology. It is famous for its giant rock pillar which is considered to be a shiv linga. The parikrama of Kinnaur Kailash is done by devotees. The trek route to Kinnaur Kailash goes through apple orchards, and small villages, and offers magnificent views of the surrounding mountains of Zanskar and Dhauladhar ranges. Kinnaur Kailash is a very sacred mountain peak for Hindus and Buddhists.

Srikhand Mahadev is one of the Panch Kailash and it is in Kullu Valley in Himachal Pradesh. This trek is considered very tough due to the mountainous terrain. The shiv linga here is a huge rock that towers high from the surrounding glacier. Heavy snow falls here and the trek route is closed during this period. The trek goes through steep mountain slopes and valleys. There are many places on this route that offer campsites for overnight stays.

Q – How many Kailash peaks are there?

There are five Kailash mountain peaks and all are sacred pilgrimage sites.

Q – Is Mount Kailash in India or China?

Mount Kailash is in the Tibetan region of China.

Q – Can we climb or touch Mount Kailash peak?

Mount Kailash is a very sacred peak. No one has ever climbed it as people say that there are some mysterious divine energies on Mount Kailash.

Q – Is the helicopter allowed to land on Mount Kailash?

No. Helicopters are not allowed to land on Mount Kailash.

Q – Which are the two lakes at the base of Mount Kailash?

Lake Mansarovar and Rakshas Tal are the two lakes at the base of Mount Kailash.

Q – Can I swim in Lake Mansarovar?

It is common to see Hindus drink water from Lake Mansarovar. They also can be seen wading in the cold waters and some also take a swim in the lake. Buddhists do not drink or wade in the waters of Lake Mansarovar.

Q – How many Kailash mountains are there in India?

There are 4 Kailash mountain peaks in India and they are in the states of Uttarakhand and Himachal Pradesh.

Q – Can I drink water from Rakshas Tal?

The water of Rakshas Tal is salty and is not fit for drinking or swimming.

Q – Can I do Kailash Mansarovar Yatra by helicopter?

Yes. Kailash Mansarovar Yatra by Helicopter is through Nepal and Tibet.

Q – Can I undertake the Kailash Mansarovar Yatra alone?

Q – Which other Kailash mountain peaks can I reach by helicopter?

Out of the five Kailash mountains, only Mount Kailash in Tibet and Manimahesh Kailash in Himachal Pradesh have helicopter services. Other Kailash pilgrimage places have to be reached by trekking only.