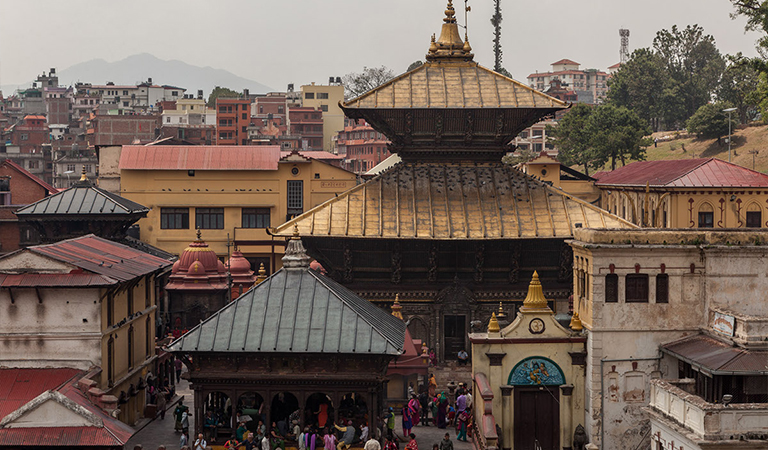 Pashupatinath Temple, on the banks of the Bagmati River of Nepal, is considered to be a famous pilgrimage place for Hindus. Dedicated to Lord Shiva, the temple holds great religious importance among the Hindus. The huge ancient temple complex marks its origin since the 5th century and holds a pagoda-style architecture. Due to its fine blend of architecture and culture, the temple has been declared as one of the famous UNESCO World Heritage Sites, among the other eight.

Pashupatinath is regarded here as the God of Animals and is worship as the masculine counterpart of Shakti. According to the legends, Lord Shiva and Devi Parvati, being mesmerized by the beauty of the place, transform themselves into deers and stay there for eternity. The common belief is that taking a holy dip in the bathing ghats of Pashupatinath Temple releases one from the cycle of births.

The best time to visit Pashupatinath Temple is during the months of July, August, and September to December when the weather remains very pleasant and many local festivals also take place. The major festivals which you must not leave behind are Teej Festival, Maha Shiv Ratri, and Bala Chaturthi Festival.

Reaching Pashupatinath Temple from Kathmandu is a very easy and smooth journey. It is at a distance of 15 kilometers from the hub of Kathmandu and thus you can get amole cabs, taxis and buses to reach the distance.

The Deity of Pashupatinath Temple

The deity of Pashupatinath Temple represents a stone Mukhalinga, with a silver serpent around it. The five faces of the idol facing West, North, East, South, and Zenith, represents the several incarnations of Lord Shiva namely, Sadyojata, Vamadeva, Tatpurusha, Aghor, and Ishana. These five incarnations indicate the natural elements of earth, water, air, light, and ether. Each face holds rudraksha in the right hand and kamandalu on the left protruding hand. The specialty of the Pashupatinath lingam is that it is dress in golden vastra.

Inside the Temple and Darshan

The Pashupatinath Temple opens at 4:00 AM in the morning and remains open until 9:00 PM in the evening. However, the morning rituals of the temple begin from 5:00 AM in the morning and continue till 12:00 PM in the afternoon. The evening rituals begin from 5:00 PM and continues till 7:00 PM in the evening. The devotees are allowed to enter and witness the rituals from the courtyard boundary, during both the time. The devotees can worship and pay homage to the deity from the four entrances of the sanctum from 9:30 AM to 1:30 PM. If any individual wants to perform Abhishek of the deity, then you will have to purchase a ticket from the counter, located at the entrance of the temple and costs around Rs. 1100. The timing of the deity Abhishek is from 9:00 AM to 11:00 AM in the morning. Timings of Pashupatinath Temple

Book your Pashupatinath Tour Package from Shrine Yatra to experience an abundant richness of religiosity, well-blended with the cultural magnificence of the place.