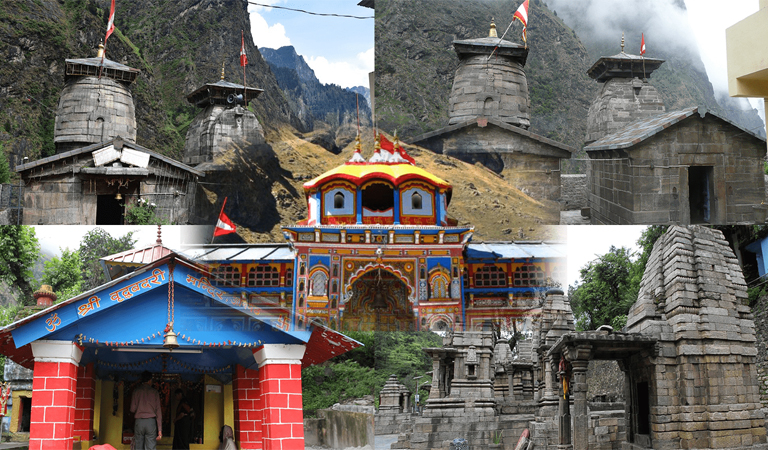 Located in the Garhwal Himalayas of Uttarakhand, the group of seven sacred temples is dedicated to Lord Vishnu. The seven holy shrines. Badrinath, Adi Badri, Vriddha Badri, Bhavishya Badri, Yogadhyan Badri, Dhyan Badri, and Ardha Badri constitutes to form the Sapta Badri Yatra. Thousands of tourists embark to the Sapta Badri Yatra for freshening their soul and mind and soothe their eyes in the mesmerizing views.

Badrinath Temple, dedicated to Lord Vishnu, regards huge religiosity. The temple is of great importance to the pilgrims and forms a major part of 108 Divyadesams and Char Dham Yatra. People flock to the revered temple during the months of April to November, to seek the blessings of Lord Vishnu and wash off their sins. During the journey to the Badrinath Temple, enjoy the beautiful views of Nar and Narayana mountains and Neelkanth mountains, surrounding it.

Next stop, is the Adi Badri Temple in the list of Sapta Badri Yatra because of its age-old existence. Adi Badri hosts sixteen temples within its huge complex and people from all over the world, visit the complex to enrich themselves in the midst of the serene location, in the bank of Pindar and Alaknanda River. The temple has an idol of Lord Vishnu which is carved out of black stone, and possess a height of one-metre.

Located on the banks of Alaknanda River, at a height of 1380 metres, Vriddha Badri Temple is dedicated to the Old age Lord Vishnu. According to the ancient mythological fact, it is believed that Lord Vishnu came in here to meet the sage Narada as an old man, and thus derived the name of the temple. It extends from Satapanth to Nandaprayag in the Alaknanda river valley and en route, you can also visit the Kapaleshwar Mahadev Temple.

Dedicated to the Narasimha or Lion face avatar of Lord Vishnu, the Bhavishya Badri Temple is situated at a height of 2744 meters, on the way from Tapovan to Lata in the Niti valley.
According to the belief, it is believed to the shrine where Lord Vishnu will appear in the future, at the end of Kaliyug. The temple has an idol of Lord Narsimha, who is believed to be an incarnation of Lord Vishnu, among the ten avatars.

Located in Pandukeshwar near Govind Ghat towards Hanuman Chatti, at an altitude of 1,829 meters, Yogadhyan Badri marks the birthplace of Pandavas from Mahabharata. According to mythological facts, it is the place where King Pandu meditated to overcome the penance of killing two deer and Mata Kunti gave birth to Karna at the Surya Kund. The temple holds a bronze image of Lord Vishnu in a meditating pose, which is believed to be installed by Pandu and thus the name derived from its posture. Moreover, the holy shrine also serves as the home to the Utsava murti of Lord Vishnu from the Badrinath Temple, during the winters.

Dedicated to Lord Vishnu, the existence of the temple is based on the mythological legend of Urvarishi. Urvarishi who happens to be the son of King Puranjaya meditated in the Urgam Valley for Lord Bishnu. The temple hosts a four-armed temple of Lord Vishnu in a meditative posture, made of black carved stone. The annual festivals celebrated in this temple are Krishna Janmashthami and Makar Sankranti.

Ardha Badri, as it’s the name indicates, means half Badri or the smallest of all the six temples in the Sapta Badri group. Located in a quaint region, the devotees need to do a trekking to reach the temple. Being the smallest of all temples, the idol of Lord Vishnu is also smaller than the other temples’ idols and dates back to Lord Vishnu’s mythological existence, as a preserver.