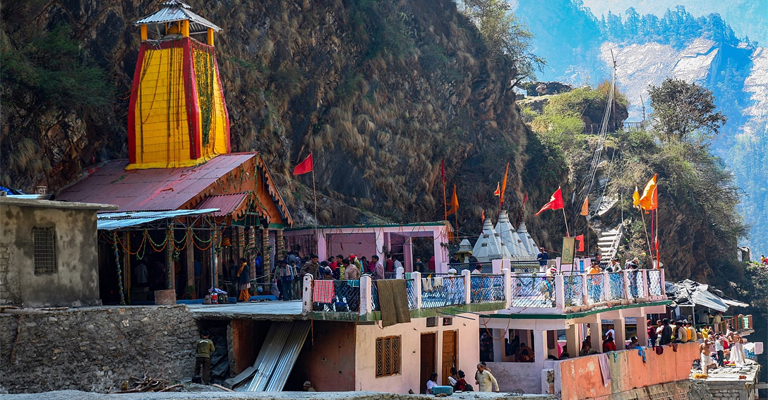 Known as the second-largest tributary of the Ganga, the popularity of the Yamuna River is huge among the mass. It originates from the Yamunotri glacier which is at a height of 6,315 meters and is itself a popular natural wonder. The river is consider to be very holy and has great religious significance too. It is believe that taking dips in it washes off all human sins and increases the longevity of human life.

The temple is consider to be one of the prime attractions of the char dham yatra. It is settled at a height of 3,293 meters in the western side of the Garhwal Himalayas. The whole temple is made of granite stones and paint with bright vermillion and pale yellow. It is topped with a conical minaret which serves as the proof of the ancient architecture. The temple holds the stone idol of Goddess Yamuna, made with smooth black marble and decorate with garlands. The beauty of the temple is further enhanced by the flow of holy Yamuna River beside it.

It is a thermal hot water spring locate just beside the Yamuna river. According to the pilgrims, the temperature of the thermal water spring even rises up to 88 degree Celsius. The Surya Kund is consider to be very holy and rice along with potatoes is boiled in water and is then distribute as ‘prasad’ among the devotees inside the temple.

Yamunotri offers some fascinating trekking options for tourists. It serves as one of the top-most trekking spots for beginners and does not include difficult terrains. The beauty of the place is enhance with surrounding green meadows and lush green and dense forests. You can also find some snowy slopes here during the winter months and may seek some adventure by skiing on the snow.

The holy lake is locate at a distance of 10 kilometers from the Yamunotri Temple and takes around two to three days of trekking to reach. It is a pristine lake with lush green nature. However, the pathway to reach the Saptarishi Kund is very difficult with rocky terrain. There is a myth about the place that seven rishis perform yogas and several yajnas around the perimeter of the holy lake.

It is situated at the confluence of two important rivers the Hanuman Ganga and the Yamuna River, at a distance of 13 kilometers from the Yamunotri Temple. Trekking options, as well as transportation facilities with jeeps, are also available. It is a popular stopover for the tourists as many shops of necessity are available.

It is a sacred stone pillar, also known as the “slab of divine light”, is near Yamunotri and Surya Kund. There is a common custom according to which the devotees who visit the Yamunotri Temple, need to worship the Divya Shila first, before entering the temple.

This place is at a height of 2,650 meters above sea level and is known widely for its natural hot springs. It lies close to the Indo-China border with a blend of greenery in its surroundings. Previously, it mark a popular and long trekking route but now, with the construction of roads the trekking route has been shorten and has also become quite smooth. There are also some scopes of window shopping for the pilgrims during their yamunotri yatra.

It is a pristine destination at a height of 1,220 meters from the sea level. As it is locate close to the Yamunotri Temple, pilgrims often visit here during their trip to Yamunotri. The destination looks extremely beautiful with the presence of tall rhododendrons and oaks amidst the captivating Bandarpoonch peaks. Besides, it also serves as a popular sports and trekking destination for the tourists.

Previously known as ‘Kushimath’, it is at a distance of six kilometers from the Yamunotri temple and serves as home to the Goddess Yamuna. Though a small town, it possess pristine natural beauty in abundance and remains cover with snow during the winters.

The popular Shani Dev Temple is locate in Kharsali at a height of 7,000 feet from the sea level. The temple is known to hold great religious significance due to its ancient origin. It also serves as the winter seat of Goddess Yamunotri.

The renowned freshwater lake is a height of 3,024 meters and holds a collection of the dodi fishes. The place also marks the origin of Assi Ganga which confluences with the Bhagirathi river. Though it has a trekking route, it is not as difficult as the other trekking paths.