Places to Visit in Ayodhya

Places to Visit in Ayodhya 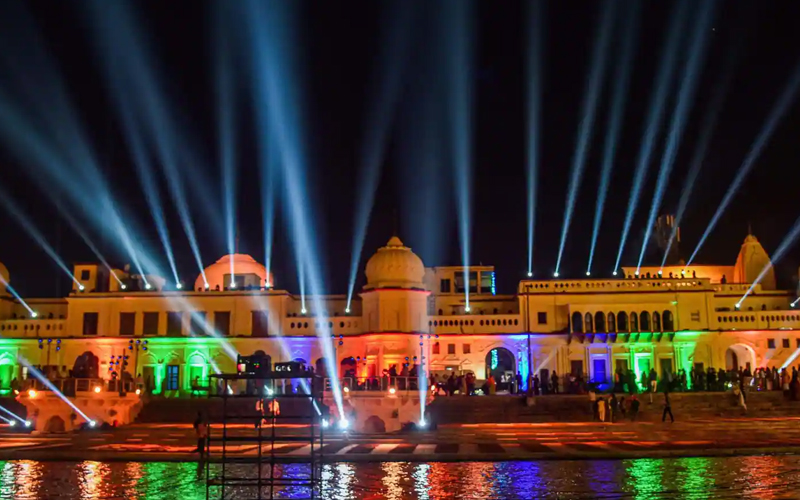 Ayodhya has made its own place and has always remained in the headlines since ancient times till today. Whether it has been a cultural, religious tradition or because of the dispute of Lord Shri Ram and his residence Ram Mandir. Ayodhya is a popular pilgrimage center situated on the banks of river Saryu. It is very special for Hindus. The city is associated with Lord Rama. According to the belief, he was the 7th incarnation of Lord Vishnu.

According to the epic Ramayana, the ancient city of Ayodhya was the capital of the Surya dynasty, where Lord Rama was born. The whole story of Ramayana revolves around Lord Rama. This epic tells about his 14 years of exile, which he cut while living in the jungles, and after many difficulties he came back to his home in Ayodhya.

Ayodhya is famous all over the world as a holy city of religion and culture. In the Atharvaveda, it is described as a heavenly city with eight chakras and nine gates created by the gods. According to the belief, ancient Ayodhya was built by Manu with the help of Vishwakarma ji under the supervision of Maharishi Vashistha.

Ayodhya, which was the capital of the ancient North Kosala province, has the distinction of being ruled by Somvanshi kings like Tretayugin Ichhavaku, Sagara, Dilip, Raghu, Aja, Dasharatha etc. Ayodhya has been known by many names according to the times, Kosalpuri, Awadhpuri, Saket. Which is mentioned in the travelogues of Chinese travelers.

It is not that Ayodhya is special only for Hindus. It is also special for Jains, Buddhas, Muslims. Five Tirthankars of Jainism were also born here, so it is special for them as well. It is also for Buddhists because Emperor Ashoka had built some stupas.

Major Places to Visit in Ayodhya

The birthplace area of Lord Shri Ram ji is Ayodhya, which is now a special district of Uttar Pradesh, which was earlier known as Faizabad district. Ayodhya is famous for historical and religious places in Hinduism. If you want to see the birth places of Lord Rama, then let us inform you about more places of interest around him. 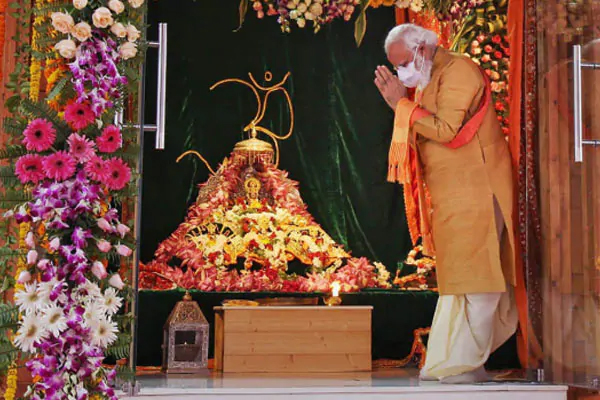 Although the entire Ayodhya is considered to be the birthplace of Lord Shri Ram, but there is also a place in this city where Lord Rama was born which is now a temple and is dedicated to Lord Rama. It is believed that it was demolished in the 15th century by the Mughal emperor Babur and built a mosque, which was a religious place for Muslims from about the 15th to the 18th century, after which gradually the dispute started.

Seeing the growing controversy, the then immediate governments closed it and after some time it was opened for both the communities, but in 1949 some Ram ji’s devotees placed idols of God in the temple, which escalated the dispute and closed it again. Gave. After that, the nineties and Leader of the Opposition LK Advani called for a nationwide Rath Yatra and chose Ayodhya as the end of the Rath Yatra.

When the mass influx of kar sevaks led by Vishwa Hindu Parishad reached Ayodhya on 6th December 1992, some members of the mob blew up the Babri Masjid. In which some people were arrested and committees of both the groups were formed by the court. So that mutual understanding should be found without hurting the sentiments of any religion, which was also heard many times, but no decision could be taken for decades.

On 9 November 2019, the Supreme Court of the country gave the verdict in favor of Hindus, as well as ordered the government to give 5 acres of land to the people of Muslim religion for a mosque somewhere in Ayodhya itself. And the foundation stone of the temple has been laid by the current Prime Minister of the country on August 5, 2020, it is believed that it will be ready in 2 years. 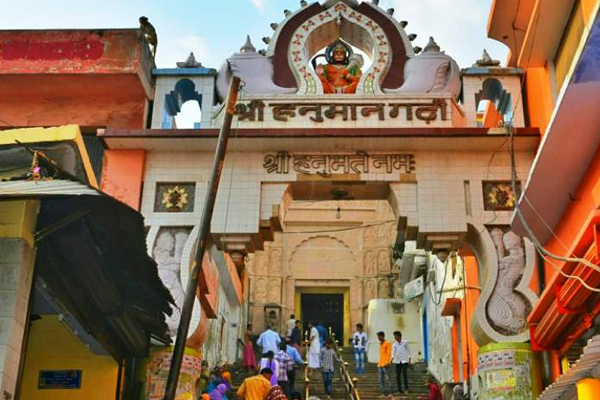 One of the most visited places in Ayodhya, this temple is dedicated to Lord Hanuman. This temple is situated on a hilltop, which gives a spectacular view of its surroundings which will captivate anyone. You have to climb about 76 steps to reach this temple. It is said that the land for this temple was given by the Nawab of Awadh and it was built around the middle of the tenth century.

Hanuman Garhi is actually a cave temple. There is an idol of Mother Anjani and Bal Hanuman ji in the temple premises, in which Hanuman ji is lying in the form of a child in the lap of his mother Anjani. It is believed that whatever vows are made with a sincere heart in this temple, their wishes are fulfilled. Therefore, there is a crowd of devotees in this temple throughout the year. 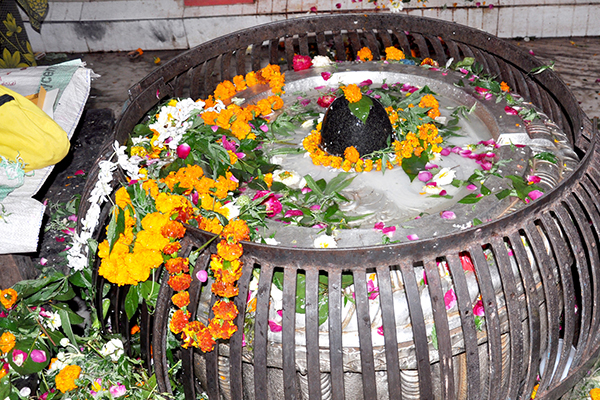 This temple is situated on the Pauri of Ram. As the name suggests, it is a temple dedicated to Lord Shankar. By the way, Nageshwar means the god of serpents, which is believed to be Lord Shiva. He is worshiped in this temple. It is believed that one day when Lord Rama’s younger son Kush was taking a bath in the Sarayu river, a bracelet of his hand fell in the water. Which he tried a lot to find but did not get success.

Being distressed, he expressed his desire to dry up the water, due to which all the animals were disturbed. Then Nagraj himself presented him with the bracelet and requested his daughter to marry him. Which he accepted. And in memory of that event, the temple of Nageshwar Nath was built by Maharaja Kush. Every year there is a huge crowd of devotees in this temple on Shivratri, or any other Shiva Puja. 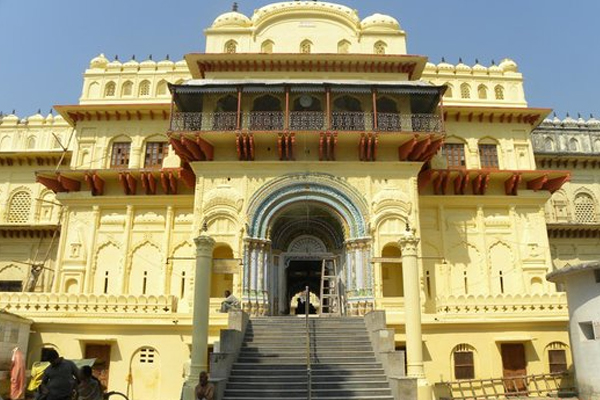 According to the legend, it is said that when Sita Mata came to Ayodhya for the first time after marriage, Kaikeyi, stepmother of Lord Rama, presented her palace to her. Later this temple was rebuilt by King Vikramaditya of Paramara dynasty, which was renovated again in 1891 by Maharani Vrishabhanu Kunwari of Tikamgarh princely state, which is still there. Its architecture is amazing which can captivate anyone. It has gold crowned idols of Sita Mata and Lord Rama. 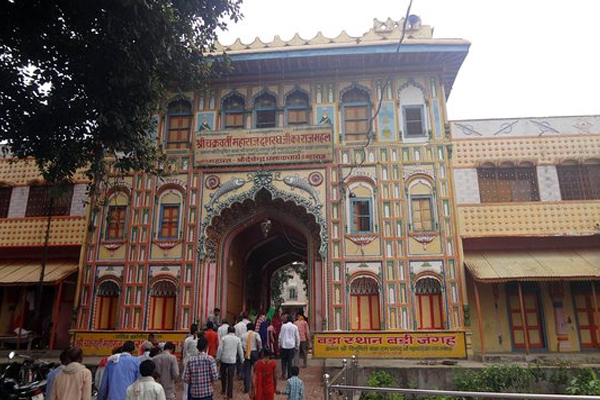 Dasaratha Bhawan is situated in the middle of the city. It is believed that it used to be the residence of Dasharatha, the father of Lord Rama and King of Ayodhya. It is a grand palace which is well decorated. Lord Rama’s childhood was spent in this building where he used to play with his four brothers as a child.

This building is in the south direction of Kanak Bhavan. According to the belief, the coronation of Lord Shri Ram took place here. It is not very grand to look at but it has a special significance in terms of culture and tradition. It deserves to be on your travel list. 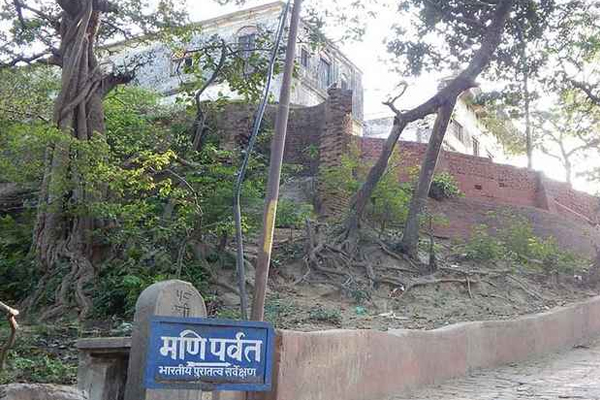 According to Ramayana, when Lord Rama’s younger brother Lakshman was injured during the war, he needed Sanjeevani Booti, and Hanuman ji went to get Sanjeevani Booti for him. He had brought the entire mountain containing the Sanjeevani herb. According to the legends, he rested on the mountain rock. So a small part of the mountain was broken and left here. The height of Mani Parvat is 65 feet. This mountain is home to many temples.

If you stand on the top of the hill, you can have a panoramic view of the entire city and surrounding areas. According to another belief, it is believed that Lord Buddha stayed in Ayodhya for 6 years and gave the knowledge of Dharma to his disciples on the Mani mountain itself. There is a stupa built by Emperor Ashoka on this mountain. There is also an ancient Buddhist monastery near this mountain. The famous Jhoola festival held in Ayodhya in the month of Shravan takes place from here.

It is situated to the west of Rajkot near the birthplace of Lord Shri Ram. This is not a royal kitchen but a temple. Just an exact reflection of the ancient kitchen. There is a belief in Hinduism that when a new bride comes home, she prepares a dish as an omen. So it is believed that Sita Mata had made something like this, although some people say that it was not made. Still it is special, in it fake utensils like chakla, rolling plate are kept and in one corner of the temple the idols of the four brothers Lord Rama, Lakshmana, Bharat, Shatrughan and their wives Mata Sita, Urmila, Mandvi and Shrutkirti are kept.

Treta Ke Thakur is an ancient temple situated on the banks of river Saryu in Ayodhya. According to the epic Ramayana, Lord Rama performed the Ashwamedha Yagya to commemorate the victory of Lanka. It is believed that this temple has been built at the exact place where the Yagya took place. It was built by the Raja of Himachal Pradesh. It is about 300 years old and the idols of Lord Rama are also kept in this temple. Along with this the idols of his brothers Lakshmana, Bharata, Shatrughna, Guru Vashishtha, King Sugriva and dear devotee Hanuman ji are also seated.

Ram ki Pauri is similar to Har ki Pauri of Haridwar but its original steps got washed away in the flood which was rebuilt in 1984- 1985. Its outline was drawn on the same lines as before. A large number of devotees come to bathe in it today. It is believed that taking a bath here washes away sins.

This fort is situated on the banks of river Saryu, which was built by Mubarak Ali Khan. Swami Yugalanand Parad ji Maharaj, a saint of the Rasik sect, used to do penance at the Nirmali Kund. After his death, Diwan Rewan Deenbandhu ji built a huge temple at this place, which is still there.

This building is very special for Hindu religion because the verses of the entire Ramayana have been inscribed on the marble of the walls. You will get to see 24 thousand verses of Ramayana. The sanctum sanctorum of this building houses the idols of Lav-Kush, the son of Lord Rama. Along with them the idol of Adi poet Rishi Valmiki ji is also installed. 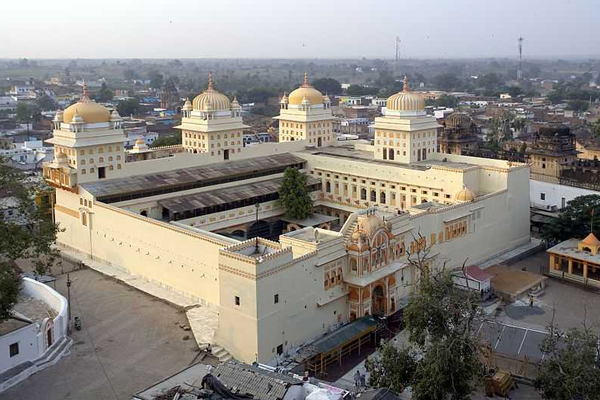 This temple is situated on the banks of river Saryu. Beautiful statues of many deities have been installed in the temple. You can be a witness to many Gods at the same place. You will get to see the best example of Hindu architecture here! You will be absorbed in devotion. Being situated on the banks of the river, you will also get an opportunity to witness a delightful sight.

This park is spread over a very large area where you will find spirituality, cultural, religious programs, dance-singing and poetry, stories all these are part of here. Travelers feel very thrilled to come here. Here both national and international artists are given a chance to shine their stars. In the evening there are grounds for children and gardens for adults.

This museum has been built in the memory of Goswami Tulsi Das. Those who are interested in literature etc. must come here because there is a library here which will introduce you to the history of literature. It is also a research center where discoveries are made on the literature, culture and spiritual subjects of Ayodhya.