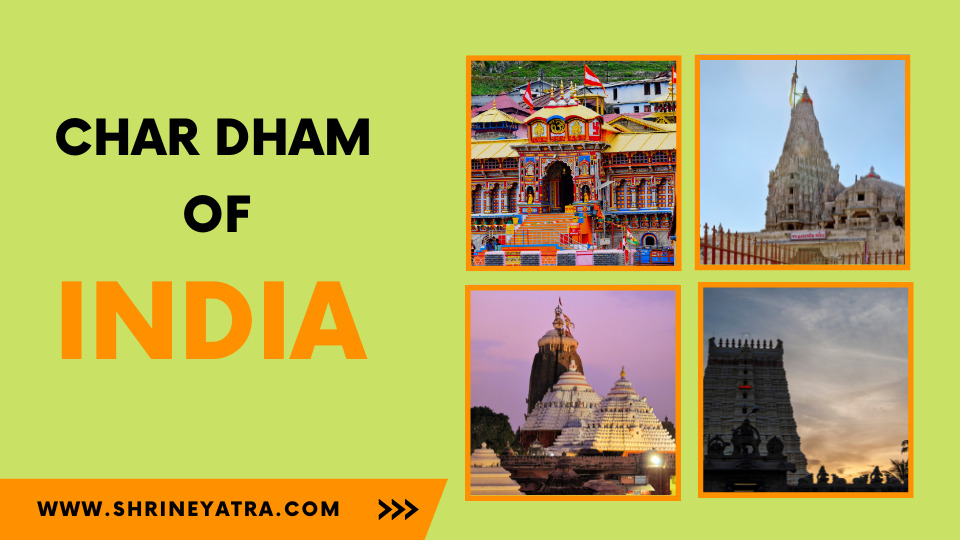 Char Dham – The Holiest of Pilgrimages in India

The Char Dham Yatra is a holy pilgrimage to the four most important temples in India. The pilgrimage to these temples is said to be so sacred that it purifies devotees of their sins and gives them moksha, or liberation from the cycle of birth and death. These four temples are the most famous temples of Vaishnava (Lord Vishnu) and Shaiva (Lord Shiva) traditions. It was Adi Shankaracharya who, in ancient times, established four religious schools in these four places. These schools were called maths or Shankaracharya Peethams and taught the Vedas, Puranas, and many ancient Hindu religious texts to students. These students propagated the religious teachings of Adi Shankaracharya and made the temples very famous all over India.

The Char Dham Temples of India

In the Sanskrit language, the meaning of Dham is a place, and Char means the number four. Hence, the Char Dham Yatra is a pilgrimage to the four places or temples. These temples are all dedicated to different divine incarnations of the forms of Lord Vishnu. Only one temple among these is a Jyotirlinga temple that is dedicated to Lord Shiva.

The most interesting thing about these Char Dham temples is that all of these are associated with the four epochs of Hindu cosmology. These four yugs are of very long duration if we count them in the number of years.

Char Dham and the Four Vedas

Why is This Called the Original Char Dham ?

Badrinath Temple is a very famous temple of Lord Vishnu. The temple is located in Uttarakhand. The mythology behind this temple is that Nar Narayan meditated in a forest of berry trees. The forest was called Badri Van. It is also a popular belief that Goddess Lakshmi protected Nar Narayan from the rain and heat by assuming the form of the Badri tree. The place where Nar Narayan meditated is called Badrinarayan Temple. The temple is located between two mountains called Nar and Narayan. The temple is very scenic and the Alaknanda River flows near the temple. Adi Shankaracharya established the Shankaracharya Peetham in Joshimath which is called Uttaramnaya Sri Jyotir Peetham. Joshimath is very close to Badrinath.

While all the Char Dham temples are temples of Lord Vishnu, the Rameswaram Temple is a temple of Lord Shiva. This temple is one of the famous 12 Jyotirlinga temples of Lord Shiva in India. This temple is also famous by the name of Ramanathaswamy Temple. There is a very famous legend of the Ramayana behind the formation of the original temple. It is said that Lord Ram asked Hanuman to bring a Shiv linga from the Himalayas so that he could atone for the sin of killing a Brahmin. Since it took a long for Hanuman to bring the Shiv linga, Sita made a linga out of the seashore and worshipped it.

The temple is a majestic example of temple architecture. There are two shiv lingas inside the temple which are worshipped. One is the Vishwalingam brought by Hanuman, and the other is the Ramalingam, which is the original linga made out of the sand. Huge corridors, massive rows of pillars, high gopurams (towers), and intricate carvings, are the things that make this one of the best temples in India.

The most scenic temple of all the Char Dham temples in India is situated in the city of Dwarka, on the western Trip of Gujarat. The temple in Dwarka is one of the finest examples of temple architecture in all of India. The main deity of this temple is Dwarkadheesh (The lord of Dwarka). The temple is said to have been built by one of the grandsons of Lord Krishna himself. Archaeological records estimate that the original temple was built somewhere around 200 BC. Adi Shankaracharya visited Dwarka and established the Dwarka Peeth, which is a school that taught the Hindu ways of life, Hindu scriptures, Vedas, Upanishads, and Puranas to disciples. Since then Dwarka became famous as one of the Char Dham temples in India. Dwarka was the kingdom of Lord Krishna. The temple is known for its magnificent carvings, pillars, sculptures of deities, and tall spires.

The temple of Lord Jagannath Puri at Puri in Odisha is one of the oldest temples in India. The temple is famous for its Rath Yatra, which is a chariot festival, where millions of worshippers gather at Puri. Jagannath Puri temple is famous for many reasons. This temple is highly worshipped by followers of Vaishnava traditions. Famous saints of India such as Madhavacharya, Ramanujacharya, Ramananda, Vallabhacharya, and Nimbarkacharya visited this temple during their lifetime. Even the great saint and divine sage, Chaitanya Mahaprabhu, spent many years of his life here and worshipped the deity of this temple.

The temple became famous as one of the Char Dham temples in India when Adi Shankaracharya visited the temple and founded the Govardhan Math here. Jagannath Puri Temple is the only temple where Subhadra is worshipped along with her brothers, Lord Krishna and Lord Balabhadra. The temple is almost 1000 years old temple. The deities are adorned with jewels and decorative clothing. There are many legends and stories behind this temple. The Mughals and other dynasties looted the temple many times during history. Many festivals are celebrated and pujas are done with elaborate rituals and religious practices since ancient times. Non-Hindus are not permitted to enter the temple.