Experience Chardham from A-Top by Availing a Helicopter

Experience Chardham from A-Top by Availing a Helicopter 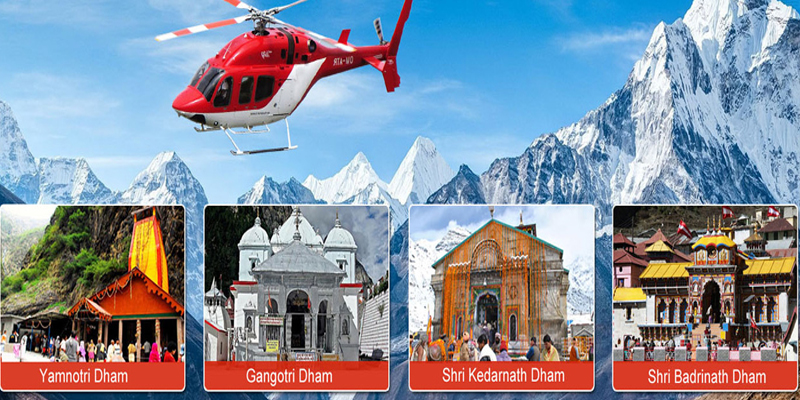 The year is just about to take a roll down, and there’s no better way to end it than the holy Chardham Yatra. Char Dhams, or the four sacred shrines in Uttarakhand, namely Yamunotri, Gangotri, Kedarnath, and Badrinath, regard great significance according to Hindu mythology. It is said that those who attempt a Chardham Yatra in their lifetime can attain moksha. Though the journey to these four holy shrines is strenuous, the ultimate spirituality that you can feel here can hardly be compared. The Chardham Yatra begins from Yamunotri and proceeds towards Gangotri, Kedarnath, to finally end in Badrinath.

However, being a Himalayan region, the roads leading to Chardham are hilly terrains and are in a rugged condition, which may make it tough for you to complete your pilgrimage. Thus, availing a Chardham Yatra by Helicopter will help you achieve spiritual fulfillment, without straining your bones. You will be provided with helicopter taxis from place to place, and also luxury vehicles somewhere, to keep the hustle at bay.

Yamunotri, the first stop, is located at the height of 3293 meters from sea level and features Goddess Yamuna, who is believed to bless the devotees which the longevity of life. Though the trekking to Yamunotri is quite famed, you can skip it by availing a luxurious helicopter tour.

Gangotri, the next stop, is wrapped with lush green nature and gushing holy river Ganga. It is believed to be the place where Goddess Ganga first originated, and is thus considered to be very religious. The best way to devour in its beauty is by a helicopter tour from the top.

The most revered shrine of Lord Shiva, Kedarnath, features captivating mountains, bathed in nature. The trek to Kedarnath is considered to be the longest one, and the hardest too. So, by opting for a helicopter yatra, you can reach there without wasting much time and energy.

Lastly, the shrine of Lord Vishnu is of enormous importance to the devotees, and there are also several mythological references along with it.

We, at Shrine Yatra, have brought to you some of our best tailored Chardham helicopter tour packages which will help you derive the utmost satisfaction.